Euromediterranea 2015 in Bosnia and Herzegovina 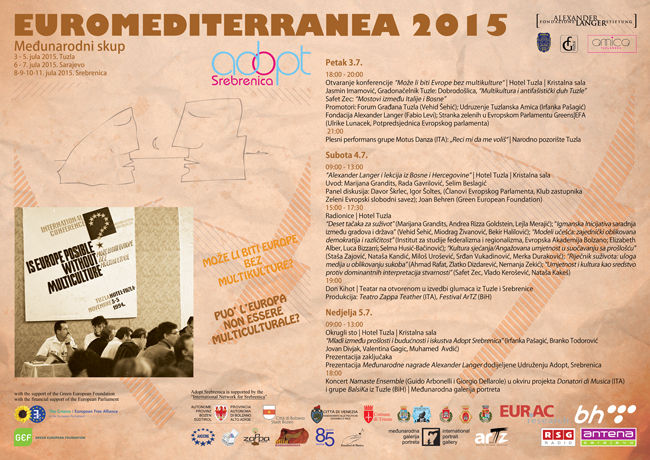 Alexander Langer was one of the most sensitive Members of the European Parliament to the European topics and to the protection of minorities. He devoted many of his last years of life to fight for peace and cohabitation, in particular to limit the most painful and destructive effects of the ex-Yugoslav wars (1992-1995). He died just few days before the Bosnian Serb attack against Srebrenica, in Bosnia and Herzegovina. That day, the 11th of July 1995, more than 8000 men were exterminated in an area that should have been protected by the UN blue helmets.

Twenty years after, in the first day of July 2015, Euromediterranea 2015 will be held in Tuzla and in Srebrenica. This event is organized for an international public and its aim is to invite people to remember the genocide and Langer’s beliefs and values. Euromediterranea will be a meeting to study and think, but also an opportunity for interaction and conviviality. It will be measured the distance between the past and the present, reflecting upon our expectations of a Europe that we would like to be ours.

During the meeting, one of the main speakers will be a group of young people who dedicate themselves to the project Adopt Srebrenica, with the support of the International Network For Srebrenica promoted by the Alexander Langer Foundation. The members of this organization have been working hard on the ground for many years. The aim is to open spaces and create opportunities for a dialogue between people with different stories and cultures and to think about the future of the city.

Langer always meant politics as an art of cohabitation, without eluding conflicts and contradictions but devoting himself always to invent new concrete solutions for dialogue and cultural enrichment. We can get inspired by this innovative way of thinking and use it to contemplate our nowadays life without forgetting the most agonizing fall back of the past.

Moreover, Langer was one of the promoters of the “Verona Forum”. In this event, citizens from different states had the opportunity to discuss and meet, even if their homelands were in war one against each other after the dissolution of Yugoslavia. Thanks to events like this, it is possible to reflect how to limit the most devastating effects of the war in the middle of the conflict, reviving relations between people.

By remembering the most dramatic events of the war – such as the siege of Sarajevo, the attacks against the safe areas - it is possible to answer to some crucial questions: what has to be done when the indifference/inactivity in front of terrible crimes against innocents risks to become a crime of negligence? When and how much is it legitimate to help people exposed to violence (victims)? What does for Europeans mean to be responsible for the death/destiny of other Europeans?

From the worse crisis during the conflict to the dedication to prevent wars near to us. That dedication has been necessary many times in the nowadays-European history. Now it is urgent for the conflicts in Syria and Iraq and for the hazards of outbreaks like the Ukrainian one. Langer’s ideas can inspire people to address present problems and Euromediterrana will give the opportunity to reflect upon these issues with different eyes and languages.

The opening meeting will take place the 2nd of July in Bolzano, the city in which Langer lived and where he developed his ideas. The second step will be in Tuzla from the 3rd until the 5th of July. Tuzla was the location of one of the most important meetings of the Verona Forum in 1994. This city is a place of cultural exchange and even in the middle of the conflict many cultural events kept going on. Today Tuzla is an open and lively city.

Between the 6th and the 8th of July will take place visits in significant historical places.

The last step will be Srebrenica, around the Memorial Day of the 11th of July. In this day, every year, new bodies of the victims of the genocide are found, recognized, buried and commemorated.

The promoters of the event are the Alexander Langer Foundation, the Association Tuzlanska Amica, the Forum Citizen of Tuzla and the State of Tuzla.