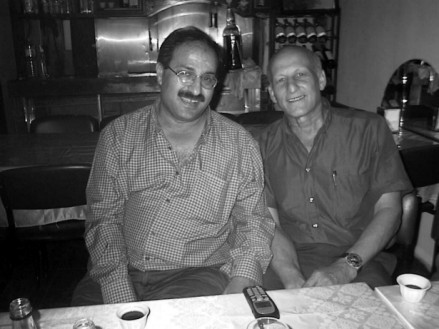 The Scientific and Guarantee Committee of the Alexander Langer Foundation has decided to award the international Alexander Langer Prize of 2001, a sum of 20.000.000 Lit. Sami Adwan and Dan Bar On, founders of the “Peace Research Institute in the Middle East” (PRIME) in Beit Jala, in Palestine. PRIME is a non-governmental Israeli-Palestinian organisation.

The reason for this award are the following.
Through their ongoing co-operation and through the founding of PRIME, Sami Adwan and Dan Bar On showed, in a time when the Oslo peace process was facing a major crisis, that only co-operation between the members of the two populations can lead out of the conflict. By their concrete work together with Israeli and Palestinian men and women and notwithstanding the escalating political troubles of the last months they followed a path of seeking democratic and ecological solutions for the area. The aims of PRIME are to build an intellectual infrastructure for the possible peace process, to break down the currently overwhelming obstacles on a long term and to influence the public opinion in Israel and in Palestine this way. In particular the aim is to gain a new generation of teachers and politicians that are ready to guarantee a peaceful co-existence and co-operation as well as common protection of the social and natural environment. PRIME is currently engaged in several actual and planned projects aiming at strengthening the civil society in Israel and in Palestine.
Dan Bar On teaches social psychology at the Ben Gurion University in Beer Sheva, Israel. He was born in 1938 in Haifa to immigrant Jewish German parents. He was a member of the Kibbutz Revivim for 25 years, worked in the agricultural sector and studied social psychology at the same time. For many years he dealt with the consequences of traumas by looking at children of victims and children of pursuers of the Holocaust. His book, “Legacy of silence: encounters with children of the Third Reich” was published in 1989 by Harvard University Press and translated into French, German, Japanese and Hebrew. At the Beer Sheva University, where many Palestinians with Israeli nationality studied, Dan Bar On initiated discussions among Israeli and Palestinian students, even before the Oslo peace agreements, and formed what were known as “facilitators” (mediators or moderators) based on the principle that university could not ignore the conflict and ought to contribute to its resolution.
At that time, this was not an obvious thing to do, neither for Israelis nor for Palestinians. Since the beginning of the peace process of Oslo, Dan Bar On sought contact to Palestinian NGOs that were wanting to improve the situation of the Palestinian population by going along with the peace process.

Sami Adwan teaches educational theory at the University of Bethlehem. His family is Muslim and is from Beit Sahur, close to Bethlehem. He studied in Amman in Jordan from 1972 until 1976 and was a lecturer at his University after graduating in pedagogy. In 1979 he emigrated to San Francisco with his family where he graduated from California State University. From 1982 to 1984 Sami worked as a lecturer at Hebron University and returned to the University of San Francisco in 1987, where he did the PhD in Education Administration.
After coming back to the Westbank in 1991 and 1992 he was held in an Israeli prison as a Palestinian activist. He has been a teacher of pedagogy at Bethlehem University since 1992 and got much into the topic of the Israeli-Palestinian conflict and into environmental education. Since the beginning of the Oslo peace talks he took part in several NGOs and took care of projects about the revision of schoolbooks in the autonomous areas. Sami lives in Bethlehem with his wife and six children. Together with Ruth Firer from the Hebrew University, he has worked on an internationally noted study, with the title “Comparative Analysis of the Palestinian/Israeli Conflict in the Palestinian/Israeli History and civic Textbooks”. Since 1997 he has been a visiting professor at the Arava Institute for Environmental Studies.

Dan Bar On and Sami Adwan met through their work for various non-government organisations and through carrying out the peace process, and in particular, through the Child and Health Care Center in East Jerusalem and through their work for the “Youth and History. Historical Consciousness among Palestinian and Israeli Adolescents”, a study of 1999 published by the Körber foundation.
The clearer the problems of the peace process on a political level became, the more both worked on the questions of co-operation between Israelis and Palestinians. Since they founded PRIME together, which also works as an NGO, Sami and Dan Bar have been pursuing the goal of showing how the common environment has been more and more devastated by the increasing Israeli-Palestinian conflict and which NGOs are trying to avoid that. Also after the recent military rise of the conflict since the new intifada Sami and Dan Bar are constantly working in the direction of the goals of PRIME.
In 1999, they founded a Christian School, “Talitha Kumi”, in Beit Jala which is attended 90% by Muslims and is run by the non-governmental organisation PRIME, managed in equal proportions by Israelis and Palestinians. Awarding this prize these two scientists as well as activists for peace and environment means to honour the work of two persons who believe that the only solution for the conflict in their area lies in a civil, democratic and environmental development and that are ready to engage for this even under high pressure and personal threat.