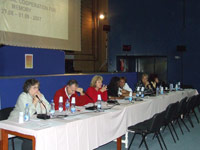 The project “Adopt Srebrenica” grew out of a long and solid relationship between the Alexander Langer Foundation of Bolzano/Italy and the organization Tuzlanska Amica of Tuzla/Bosnia Herzegovina.

The effective collaboration started in 2005 when Irfanka Pašagić received the Alexander Langer International Award. In July 2005, during the days of the commemoration of the 10th anniversary of the genocide of Srebrenica, the International Summer School of the Foundation took place in Tuzla e Srebrenica. A numerous group of youth people coming from Bosnia, Croatia, Germany, Poland and Italy participated.

In that occasion principally by Tuzlanska Amica developed an ambitious and innovative idea that was immediately welcomed and supported by the Langer Foundation: the idea was to try to keep and improve the International attention on Srebrenica.

Initially the fulfilment of this project was put in the hands of a net of International collaborators with the support of Tuzlanska Amica and of the Alexander Langer Foundation, but also from other organizations and institutions from Italy, Bosnia Herzegovina and Europe.

In December 2005 the first official meeting of the International net on the project took place in Bolzano. Particularly relevant was the participation of a group of young people from Srebrenica who became a fundamental part of the project and took part in all meetings from then on. From this moment the project was called “Adopt Srebrenica”: the idea to construct an International Centre in Srebrenica came to life.

The 22nd December 2005 the Alexander Langer Foundation received the Award “Rome for Peace and Humanitarian Action”, whose amount was given to the project “Adopt Srebrenica”.

Thanks to an invitation of the Municipality of Reggio Emilia (Italy) a second meeting on the project took place in May 2006: The Italian and Bosnian partners as well as the International net presented “Adopt Srebrenica” to institutions and organizations which were engaged in twinning, exchange and support activities in Bosnia Herzegovina. The group participated in a public meeting on “Traumas of war, justice and reconciliation” and visited Marzabotto (Italy) and the Historical Park of Monte Sole.

For the 11th July 2006 the Foundation organized a second trip to Bosnia Herzegovina, and let its participation to the commemoration of the genocide become a tradition, continued also in 2007.

The International week “International Cooperation for Memory” was organized thanks to the two coordinators, Tuzlanska Amica, the Alexander Langer Foundation, the local working group in Srebrenica and skilled Italian and German volunteers.