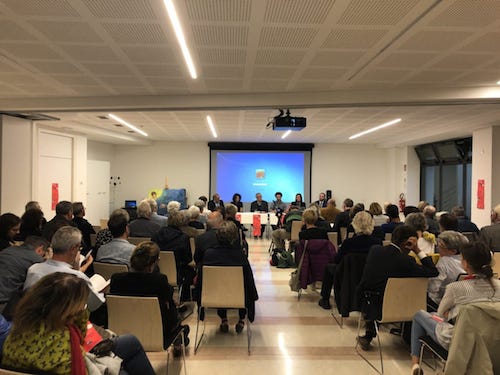 The International Alexander Langer Award 2018
is awarded to the Arava Institute for Environmental Studies
for environmental co-operation projects between Israelis and Palestinians. Citation.

The Arava Institute was founded in 1996, in a situation which was very different from today’s. In those years immediately following the Oslo Accords, the atmosphere for a while and for the very first time really appeared to be promising for a lasting solution to the Israeli-Palestinian conflict. Hope, however, would give way to something different, as symbolised by the assassination of Yitzhak Rabin. Aware of the social responsibility which inevitably accrues from working in the Israeli – and more generally the Middle-Eastern - context, the founders of the Institute decided to promote environmental research and work as a tool for peace and with a view to bring peoples closer together.

Environmental deterioration often goes hand in hand with social deterioration and the worsening of relations among peoples and groups. The area straddling southern Israel, Egypt and Jordan is a clear example of this: conflict between peoples markedly aggravates the already difficult situation caused by the scarcity of resources and the complexity of their use in a substantially desert area. The Institute in particular studies the management and conservation of energy and water, which are essential resources for the lives of all communities, seeking cross-border solutions and promoting environmental co-operation between Israel, Jordan and Palestine. Only co-operation can save the environment and only environmental pressure can convince people that agreement is more productive than conflict. Environmental co-operation is the most “natural” and least political, and thus the most politically effective form of co-operation, and can open the way to other, further forms of co-operation.

Thus the Arava Institute has become a builder of bridges, promoting cross-border co-operation in the environmental field, as a concrete bottom-up contribution to identifying and solving common problems, in the conviction that conflict cannot be settled by directly attempting to tackle the thorniest and most symbolic issues, but that they can be taken apart by starting with the solution of cross-cutting issues which are shared by all the inhabitants of an area, independently of the borders between states and, no less importantly, between the members of societies themselves.
Arava’s contribution to this idea has been to educate the new generations, creating environmental management professionals in the Middle East, trained to identify and solve environmental problems in a cross-border and multi-disciplinary perspective. Cross-border because the environment has no frontiers; issues are therefore analysed in a regional perspective, and students are deliberately taken from different origins – approximately one-third Israelis, one third Palestinians and Jordanians, and one third international. Interdisciplinary, because one cannot study environmental issues, particularly in a region like the Middle East, without an awareness of the social and political context in which they occur and technical skills in various disciplines have to be combined with social skills relating to the locations one is operating in. The latter is as important as it is difficult to acquire. Where dialogue has broken down, or in fact has never even started, the first necessity is to build it up. The creation of mixed groups and spaces is something which cannot be taken for granted in these areas, and at times it brings students into contact with completely different realities, outlooks and feelings for the first time in their lives. Only through this process of understanding oneself through others, and society through dialogue, is it possible to create a common basis which can lead to the solution of problems and, in the long term, the overcoming of conflicts.

The Arava experience teaches us that this is not an easy path to travel. Often, coming into contact with different realities and different ways of perceiving things is a tough experience and requires an effort to process. Living, studying, seeking environmental (and thus also social and political) solutions, in close contact with those who are considered enemies outside that place, is not just complicated but requires an exercise of internal processing of the social context which can be frightening.

Hatred is easier and more widespread with regard to those one does not know, but prejudice takes time and effort to break down. Study and spaces are shared for up to a year at the Institute in an effort to break down divisions and seek solutions to common problems. This has a major impact, also because courses are held in a kibbutz (Ketura, in the South-Eastern Israeli region of Arava), and this is not an easy choice, which is also open to criticism. The conflict is in the background, always present but never central. Students are led not only to understand the experience and the perspective of others, but through them to reflect critically on their own way of thinking about things.

Getting to know others and re-considering oneself are the two essential steps required in order to become bridge-builders. They are indispensable, but also terribly difficult to take in everyday life. Leaving the safe harbour of one’s own convictions takes time, aptitude, effort and dedication, because the risk of falling back into the Manichean distinction between wrong and right is always present. Even with the best intentions.

Arava is not the only experience of this kind, even though it is distinctive and Langerian, in its choice of theme and approach. The decision to give the 2018 Langer award to the Institute is in continuity with the 2001 Award to Sami Adwan and Dan Bar On, the founders of the Peace Research Institute for the Middle East (PRIME), who with the support of students and teachers produced a book entitled Learning Each Other’s Historical Narrative, a school-book which collected and accepted the two opposite narratives of an area deeply marked by opposing memories, using knowledge and acceptance as a first step towards a closer understanding. While Learning Each Other’s Historical Narrative tackles the thorniest issues and the most deeply rooted taboos among the conflicting parties head-on, Arava’s approach is different. But the goal is the same, and also common is the choice of the realism of small steps. If one cannot yet write a common history, one can start by reading the other side’s history. If one cannot solve the conflict, one can start by dealing with the problems which are shared by communities who disagree on everything. Helping to shape flexible minds can wear down the rigidity of irreconcilable positions. The Award now returns to Israel and Palestine to become a sounding board for Arava’s message, which follows in the footsteps of Alexander Langer’s: taking care of the environment, in a land marked by conflict, taking care of people through dialogue. So far more than one thousand students have attended Arava courses. They are the multipliers of Arava’s ideas and method, they are the solution finders. The Award recognises their work, but also stands as an encouragement to all those who seek innovative ways to overcome the obstacles of the conflict, by solving problems instead of creating them.

8.000 of the 10.000 euros with which the International Alexander Langer Award
is endowed are provided from the Foundation Cassa di Risparmio di Bolzano